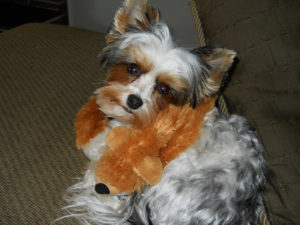 Usually, Yorkies come in black and tan color but there is one unique category of Yorkie that comes in white color. The white colored Yorkie is termed as Parti Yorkie. Parti Yorkies were recognized by American Kennel Club or AKC in the year 2000. Parti Yorkies could also be found in other color combinations like chocolate and golden color. It is assumed that still more categories of Parti Yorkies could be explored as breeders are still discovering facts related to this breed.

You will be amazed to know that some breeders have doubt on the existence of Parti Yorkies as pure Yorkshire breed. According to some expert breeders, Parti Yorkies are not regarded as the true Yorkshire terriers. Breeders with this certainty are of the view that the white gene does not exist in Yorkies. This breed has been known for years due to its darker color, diminutive broken hair, and harder coats. It is also said by some senior breeders that to increase the length and to alter the texture of the coat, a dog breed Maltese was crossed with Yorkshire breed.


Initially, there were strict rules and standards set by the AKC regarding the color of Yorkies but with the passage of time, the rules were also altered. Blue and tan colored Yorkie was only recognized in earlier times and all other characters were ignored. As time passed different colored Yorkies including black, gold and white were also included in dog shows. So standards for Yorkies actually changed in the late 1800s and in the same timeline Parti Yorkies made their identity acceptable.

Parti Yorkie is a rare breed of dogs and therefore expensive too, but the history of this breed seems ambiguous and not well known. It is said that people became familiar with this breed of dog in 1800 when due to rapid industrialization people from different regions get socialized and relocated. Some of the people brought Yorkshire dogs along with them and in this way the bred gained recognition and popularity. Primarily these terriers were used to catch small sized animals including mice.


At present, the official parental lineage is not clear for this breed of dog and various breeders and researchers are having different shreds of evidence. It is possible that when Maltese was crossed with Yorkshire, a recessive white gene transferred that dominated in some rare dogs of this breed that were later named as Parti Yorkies. Although it is supported by evidence that white Parti Yorkies do exist in earlier times but were considered non-standard.

There has been a critical error on your website.

Learn more about debugging in WordPress.